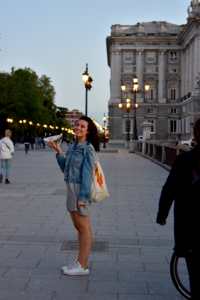 Major/Minor: BA English, with minors in Journalism and Sociology

What Role Has the English major played in your career path?

Less than a week after graduating from college in 2015, I started as an intern at Gurl.com, a website for teen girls. I felt somewhat insecure about this for a number of reasons. Like most English majors, I’d been getting a lot of “So, what are you going to do with that?” questions from supposedly well-meaning family members and friends since the moment I’d declared, and, for a while, I didn’t really know what I was going to do. The decision to work in media was one I had made at the beginning of my senior year, so, while I’d managed to cobble together some internships (I worked as an intern for the Wake Forest Office of Communications and Wake Forest Magazine), I didn’t have the traditional NYC media background I assumed was expected of me. But when I got started, I was pleasantly surprised by how much I already knew how to do, thanks in large part to my English major, and by the end of the summer I was offered a full-time position.

Obviously, the nature of writing Internet Content™ is different from that of writing, say, a research paper on Mrs. Dalloway. (I’ve found that it requires a lot more memes and a lot less time.) Still, the fundamentals that I learned as an English major at Wake have  been incredibly helpful in my work as a writer and editor. I know how to stick to deadlines. I know how to put out quality work in a limited amount of time. I know how to read the work of my peers and make changes or offer suggestions on how to make it better. Most importantly, the English major has taught me to think critically, pay attention to detail, and maintain a general curiosity that I intend to use in my career and life for years to come.