Lilian Nassif, an English and Communication double major with a minor in Journalism, gave the closing remarks at the first 2021 Bachelor of Arts Diploma Ceremony (the first recognized majors from Anthropology to German, alphabetically; the second was for majors from History to Women’s, Gender, and Sexuality Studies). Nassif spoke about how her ability to use her imagination has shaped her experiences, from growing up in Saudi Arabia to her time as a student at Wake Forest. She called upon her fellow graduates to nurture their capacity to imagine and wonder as they enter the world and seek to change it for the better.

Read Nassif’s full speech and view it as part of the recorded ceremony below.

I Want to Talk to You About a Rebirth of Wonder

During a time when most of my energy was spent working for awards, good grades, and standardized scores, Wake Forest asked me to do one more thing: to imagine. My fellow graduates will remember this moment from four years ago. As part of our Wake Forest application, we were asked to write a top ten list, a prompt so open-ended that it almost felt bizarre. I remember feeling vulnerable because—for the first time in my high school career—there was no Google search or Quizlet that could offer the perfect response I ached to provide. I had no other choice but to think for myself, outside of the box, using my own imagination to reveal who I was through a simple list.

As I completed the list, I realized I had reawakened a fundamental skill I had exercised unconsciously my whole life. Growing up in a multiethnic household in Jeddah, Saudi Arabia, meant that I had always needed to imagine connections among the languages, cultures, and philosophies that culminated in my personal identity. Within me were these powerful pairings: the common value of kindness inherent to both Christianity and Islam, the similar intonations of the Spanish and Arabic languages, and a host of fears and desires that are shared among all people.

Unlike any other species on the planet, we have been gifted with the power to imagine. This gift allows us to see beyond the binaries and to form connections between groups that, on the surface, might seem worlds apart. From the very beginning of our association with Wake Forest, we were asked to imagine—because what is education without this quality? It takes imagination to learn and to challenge our own belief systems; it takes imagination to care about and to defend causes beyond our individual life experiences; and it takes imagination to forgive, to grow, and to move forward, regardless of the challenges.

Creating a top ten list for Wake was more than just a fun activity—it was an initial test of our capacity to think critically about who we are, using our creativity to convey our identity in a way that goes beyond black-or-white thinking.

Growing up as a woman in an authoritarian regime taught me the power, as well as the danger, that can come from being able to see the world for its grey spaces. When my external circumstances restricted me, imagination and inquiry were my strongest weapons because they offered me a vision of the future that not only felt, but in fact was, limitless.

Wake has taught me to see imagination as a pillar for human empathy. And as we look to the future this year, and reflect on the meaning of success, we should realize that imagination comes at the heart of that too.

When we think about what we want to do and who we want to become as we engage the world, each of us can look back at what we have learned here. The times where I have been the most successful were not when I was motivated by external markers of success, such as status or prestige. My best moments here were when I was motivated by my excitement and my passion, especially when I could imagine myself doing something.

Lawrence Ferlinghetti’s poem, “I Am Waiting,” describes the significance of imagination, in allowing us to envision, and create better possibilities for, our future. In it he says:

I am waiting for my case to come up

for a rebirth of wonder

and I am waiting for someone

of a new symbolic western frontier

for the American Eagle

to really spread its wings

and straighten up and fly right

for the Age of Anxiety

and I am perpetually awaiting

a rebirth of wonder

Through Ferlinghetti’s vision, we have been reminded of our power to build a future that brings our innocence, imagination, and excitement to the forefront in a rebirth of wonder. Fellow graduates, as we move forward into a new era where we take the reins and navigate our own lives, we should nurture our capacity to imagine and wonder. We do not need magic to change the world; we carry all the power we need inside ourselves already. Wake Forest has shown us the power of imagination. 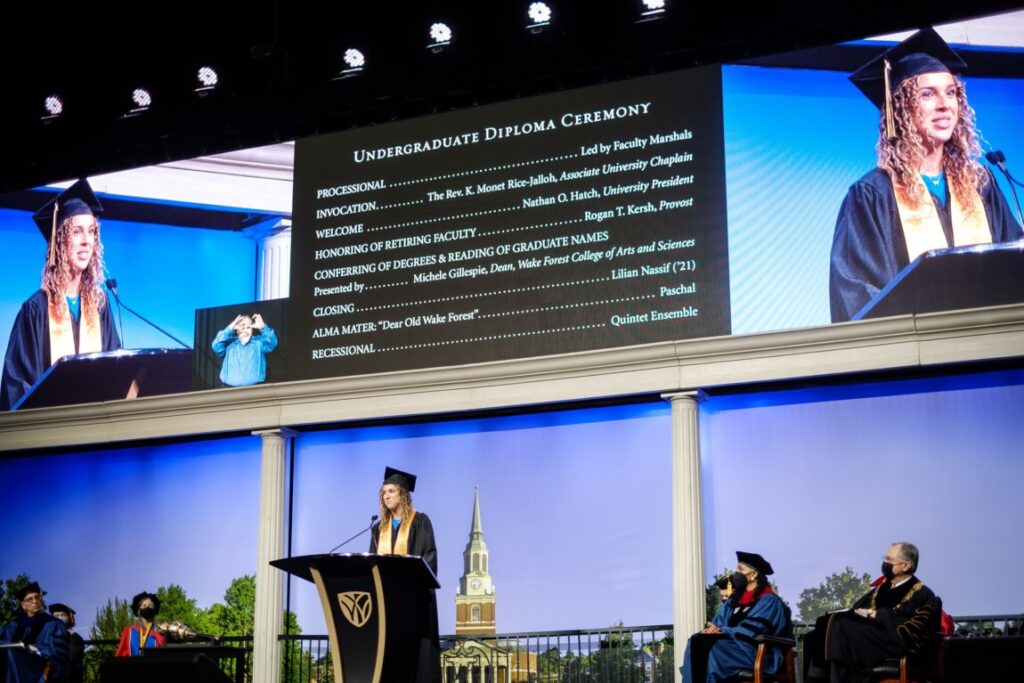