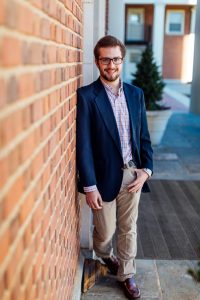 Highlights of your time at Wake: I remember a couple years ago gushing to a friend at a different school about one of the early English classes I was taking. It felt like I had found a new and revolutionary way to exist in the world, I told her. That is to say that the classes I have taken and the professors who taught them, as well as the exceptional people who I’ve befriended, all constitute the highlights of my time at Wake.

Post-grad plans: I hope at some point to go to graduate school to think about a changing climate and the implications that holds for politics, narrative, and humanity.

Why I majored in English: Last year, I had a running joke (though “joke” may be a stretch) where I would pivot a conversation about anything at all into a “pitch” to major in English (“Oh, you found your summer teaching English to young children rewarding? Well, you know what else is rewarding? Majoring in English!”). The “pitch” was a pivot, but never a non sequitur—I consider a major in English to be in sequence with most disciplines and all conversations—although it was probably unfunny by the fifth or fifteenth go-around. I meant it each time, though. A major in English has much more versatility in the job market than I think most people give it credit for, but that’s not really why I started taking English classes, and it’s not the biggest reason I keep taking them. I take English classes because the world is a confusing mess and I need English classes to delineate the terms of the confusion. In that spirit, I’ll answer the question with a question: How could I not?