Professor Randi Saloman is a scholar of nineteenth and twentieth-century British literature. She did her 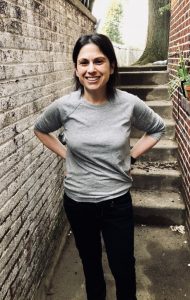 undergraduate work at Columbia University in New York City, where she double-majored in English and Classics. Unfortunately, she has since forgotten nearly all of the Latin and Greek she learned—aside from some Catullus poems and a few lines of Horace she memorized by accident. She went on to earn her Ph.D. in English Literature at Yale University. She has previously taught at Wesleyan University and at Cornell University, where she served as a Mellon Postdoctoral Fellow, before coming to Wake Forest in 2010. The eight years since have been almost—but not quite—long enough for her to acclimate herself to life in North Carolina. A native Bostonian, you will occasionally still find her transfixed and muttering to herself in January, when she returns to campus to find trees blooming. She is the author of Virginia Woolf’s Essayism (Edinburgh UP 2012; pbk 2014) and the editor of The Grand Babylon Hotel by Arnold Bennett (Broadview, 2016). Currently she is writing a book on hotels in literature (Hotel Citizens: Space, Place, and Domestic Life in Modern British Fiction). She is also at work on a new, semi-secret project, which she may tell you more about if you ask her. She is the editor of The Arnold Bennett Society Newsletter. Her articles and book reviews have appeared in publications such as Twentieth Century Literature, Genre, Modernist Cultures, Tulsa Studies in Women’s Literature, Review of English Studies, Modernism/modernity, and the Journal of Modern Literature.

At Wake Forest, Professor Saloman teaches a variety of courses in British literature. These include introductory classes (her English 165 course is drawn in large part from her current hotel work), the gateway to the major, and advanced courses on twentieth- and twenty first- century writers, such as The Edwardian Effect and Contemporary British Fiction. She maintains the old-fashioned belief that reading literature makes you a better person, if only because it forces you to broaden your outlook and to temporarily occupy the lives of others. [She clings to this belief despite knowing some truly awful people who have dedicated their lives to literary study. Better doesn’t always mean “good,” after all!] She believes that thoughtful reading and focused analysis are critical skills not only for English majors or literary enthusiasts, but for all responsible citizens of the world. She is proudest of the many students who have told her (long after it did them any practical good to do so) that they have come around to this view after studying with her.