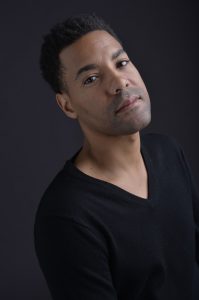 Lamar Wilson is Assistant Professor of Creative Writing. This is his first year teaching at Wake Forest.

Dr. Wilson comes to Wake Forest from the creative writing faculty of The University of Alabama after appointments at Davidson College and The University of North Carolina-Chapel Hill, where he completed his doctorate in African American and multiethnic American literatures.

Lamar’s documentary poetics has been featured in two poetry collections, a stage production, and a film: Sacrilegion (Carolina Wren Press, 2013), a finalist for the Thom Gunn Award; Prime (Sibling Rivalry Press, 2014), a co-authored hybrid text of poetry and conversation and a 2015 American Library Association “Over the Rainbow” selection; The Gospel Truth, a musical adaptation of Sacrilegion; and The Changing Same, a collaboration with Rada Film Group, which debuted in PBS’s POV Shorts series this summer.

A former USTA teen champion in his native Florida, Lamar still enjoys the sport and long-distance running. In addition to courses he’s teaching this fall, he aims to introduce others on formal and experimental poetics, the ethics of race-conscious creative writing, and African American beauty aesthetics in literature, visual art, and film that excelled elsewhere.