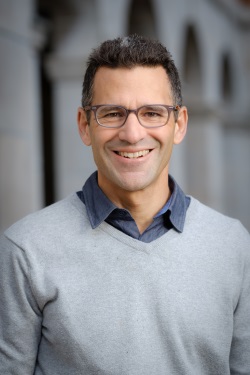 Dean Franco is Professor of English and Director of the Humanities Institute. Since joining Wake Forest in 2001, he has introduced new courses into the curriculum, including Studies in Chicana/o Literature and Multiethnic American Writers, and he has taught courses on comparative race studies, human rights and literature, literature and theory, and first year seminars on secularity and religion, and uncertainty. Dean served two terms as the English department co-chair, and he was the founding director of the Jewish Studies minor. In 2010, Dean was among three faculty who co-founded the Humanities Institute. Dean’s books include Ethnic American Literature:  Comparing Chicano, Jewish, and African American Writing (Virginia UP, 2006), Race, Rights, and Recognition:  Jewish American Literature Since 1969 (Cornell UP, 2012), and The Border and the Line: Race, Literature, and Los Angeles (Stanford UP, 2019).  Dean’s essays appear in PMLA, Modern Fiction Studies, Contemporary Literature, and NOVEL, as well as books published by Cambridge UP and Oxford UP.

Dean has taught at Casa Atom in Venice three times, and enjoys traveling with his wife and two sons.  Originally from Southern California, Dean has come to love cycling, hiking, and camping in the North Carolina and Virginia mountains.