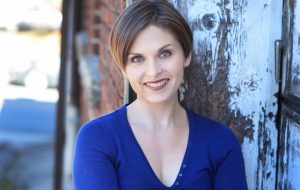 As an undergrad I double majored in English and Theatre, and I graduated in 2000. I finished my MA in English at Wake in 2013, and I earned an MFA in Creative Writing from the University of South Carolina in 2017. I am currently a PhD candidate in American Literature at USC.

I never really know how to respond to this question, since my family moved around a good bit while I was growing up. I lived in Columbia, SC when I first went off to college (and that’s where I live now), so if you held a gun to my head and made me choose, I guess I would say Columbia. However, I think it would be more accurate to just say that Columbia, SC is my current location.

What role has the English major played in your career path?

Hmm. Well, my “career path” has been rather circuitous. From working as a professional actor, to working for one of Martha Stewart’s magazines, to working various office jobs in New York City, I relied on the flexibility of my English major to survive my 20s. After discovering that I was supposed to be a writer, I spent my 30s in graduate school reading, discussing, and writing about great literature in order to become a better writer. And now at 40, I just published my first book, Limited By Body Habitus: An American Fat Story. So it would seem that the major I chose purely for enjoyment when I was 17 years old has actually guided my path all along.

A major in English makes you a better reader (of texts, of current events, and of people), which can be an advantage in work and/or social situations when you find yourself surrounded by individuals who are blind to subtext and can only perceive the world in binary terms. However, this can also be the great tragedy of being an English major, as such awareness can be uncomfortable and isolating. It’s a trade-off, I suppose: painful awareness or comfortable ignorance. I made the right choice.