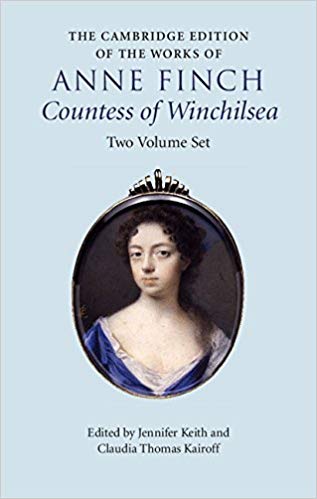 The Cambridge Edition of the Works of Anne Finch, Countess of Winchilsea, Volume I: Early Manuscript Books, Eds. Jennifer Keith with Claudia Thomas Kairoff (pp. clxiv + 819) has been published. This is the first complete critical edition of Finch’s writings; Volume II will be printed later this year.
Anne Finch (1661-1720) was the most important woman poet of the early eighteenth century. Praised by Pope and Wordsworth, her poems have been anthologized continually. Partial editions were published in the twentieth century, but this is the first time that all of her poems, two plays, and surviving letters will be available to students and scholars, complete with extensive commentary, a timeline of important dates, textual apparatus, explanatory notes, and a reception history. The edition establishes Finch’s texts based on the first appearance of each and includes all authoritative variants.
Keith and Kairoff were supported generously by their respective institutions, The University of North Carolina at Greensboro and Wake Forest University, while working on the edition for more than a decade. Their project received an NEH Fellowship for Editions and Translations, an NEH-funded Fellowship at the Folger Shakespeare Library, and numerous other grants and awards.
About the Editors:

Jennifer Keith is an Associate Professor of English at the University of North Carolina, Greensboro, where she has taught since 1997. She is the author of Poetry and the Feminine from Behn to Cowper (2005) and numerous essays on poetry from the Restoration to the Romantic era. With the staff of the University Libraries at the University of North Carolina at Greensboro, she developed The Anne Finch Digital Archive, an open-access site that supplements this edition. Keith is a member of the American Society for Eighteenth-Century Studies.

Claudia Thomas Kairoff is Professor of English at Wake Forest University, where she has taught since 1986. She is the author of Alexander Pope and his Eighteenth-Century Women Readers (1994) and Anna Seward and the End of the Eighteenth Century (2012), and co-editor, with Catherine Ingrassia, of ‘More Solid Learning’: New Critical Perspectives on Alexander Pope’s Dunciad (2000). She has written numerous articles and book chapters on Pope and on women poets. She is a member of the American Society for Eighteenth-Century Studies and of the Southeastern American Society for Eighteenth-Century Studies.