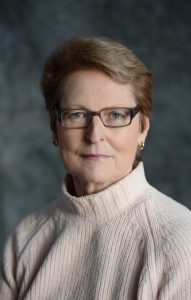 Renowned Shakespeare scholar Jean Howard will give a Dean Family Series talk titled “Rewriting Shakespeare: Bond’s Bingo” on Thursday, March 15 at 4:30 p.m. in ZSR Library Auditorium (Room 404). A reception will follow. This event is free and open to the campus community and the general public.

In Bingo Edward Bond writes about Shakespeare’s last years after his retirement to Stratford and his morally dubious involvement with economic practices that make the lives of the poorer residents of Stratford much harder. Jean Howard argues that through his engagement with the figure of Shakespeare, Bond meditates on the violence of an early moment of capitalist expansion and does so by evoking images and scenes from Shakespeare’s own plays as evidence against the playwright’s own actions.

Jean E. Howard is George Delacorte Professor in the Humanities at Columbia University where she teaches early modern literature, Shakespeare, feminist studies, and theater history. Howard has authored over fifty essays; her books include Shakespeare’s Art of Orchestration: Stage Technique and Audience Response (1984); The Stage and Social Struggle in Early Modern England(1994); Engendering a Nation: A Feminist Account of Shakespeare’s English Histories (1997), co-written with Phyllis Rackin;  Theater of a City: The Places of London Comedy 1598-1642 (2007), which won the Barnard Hewitt Prize for the outstanding work of theater history for 2008, and Marx and Shakespeare in the Great Shakespeareans series (2012), co-written with Crystal Bartolovich. In addition, Professor Howard is one of the co-editors of The Norton Shakespeare and general editor of the Bedford Contextual Editions of Shakespeare, for which with Pamela Allen Brown she edited As You Like It. She has edited seven collections of essays and has received Guggenheim, ACLS, NEH, Huntington, Folger, and Newberry Library Fellowships. Howard has received several awards for the teaching and mentoring of graduate students and has directed over fifty doctoral dissertations. She is completing a new book, Staging History: Forging the Body Politic, that considers the different genealogies of the history play in America and England in the twentieth and twenty-first centuries.