Majors, minors, and graduate students in the English department were recognized at the annual awards reception on April 24, 2019 in the Magnolia Room. 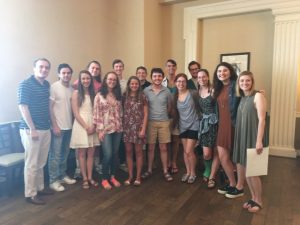 ENGLISH DEPARTMENT AWARD RECIPIENTS 2018-2019
Robert N. Shorter Medieval Prize: Andrew Murphy
Robert N. Shorter was the principal medievalist in the English department for 41 years. Professor Shorter was one of the founders of the Medieval Studies program and minor. His legacy as an exemplary professor, colleague, and mentor is what we hope to uphold in the Wake Forest Medieval and Early Modern Studies Program. The Medieval Studies Award was renamed the Robert N. Shorter Medieval Prize in 2003.
H. Broadus Jones Shakespeare Prize: Davis Clark, Thomas Simonson
H. Broadus Jones Memorial Scholarship: Taylor Crandall, Kyle Ferrer
H. Broadus Jones Senior Award for Excellence in English: Sophia Hollis
H. Broadus Jones M.A. Student Award for Excellence in English: Geophrey Darrow
H. Broadus Jones was professor and chair of  English for many years. He taught Shakespeare, Romantic poetry, and Victorian poetry at Wake Forest for much of the first half of the 20th Century. The Shakespeare Prize award recipient is a student whose oral and written work shows the greatest insight into Shakespeare. The H. Broadus Jones Memorial Scholarship was set up in 1972 by his family in his memory to recognize the outstanding accomplishments of our rising senior majors. And each year a graduating senior and a Master’s student whose work exemplifies Jones’s spirit of scholarship and dedication to the study of literature are chosen to receive the H. Broadus Jones awards for Excellence in English.
Bashir El-Beshti Prize in Renaissance Studies: Candelaria Penate Cock, Geophrey Darrow
The late Bashir El-Beshti was for many years one of the most beloved and esteemed members of our department. He was noted for his high standards in teaching and scholarship. A fund was established in his name to recognize distinguished students who fulfilled his ideals of learning.
Jerry B. & Callie Irene Stone Award Honoring Professor Alonzo Kenion: Matthew Schlosser
Alonzo “Al” Kenion taught at Wake Forest University from 1956 until 1983. He taught courses in 18th-century English literature and was a frequent teacher in our Interdisciplinary Honors program. The award is given to a student excelling in an English course formerly taught by Professor Kenion.
D.A. Brown Award for Excellence in Creative Writing: Maddie Baxter
The late D.A. Brown was a member of the English department for many years. He was noted for his high standards, and on his retirement, a fund was established to recognize excellence in writing. The Creative Writing program began offering awards in his honor in 2016 to students who show talent in the art of creative writing.
Bynum G. Shaw Prize in Journalism: Lillian Johnson; Finalists: David Ajamy, Julia Haines, Ren Schmitt
The Bynum G. Shaw Prize in Journalism honors Bynum Shaw, a 1948 Wake alumnus and professor of journalism. At his retirement in 1993, friends, colleagues, and former students contributed to a fund to endow a graduation prize in his name. They wanted to memorialize a man who encouraged his students to think of themselves as writers and to try to publish inside and outside the college community.
Beulah Lassiter Raynor Scholarship: Margot Handley, Chris Verrill
This award is named in honor of Beulah Lassiter Raynor, who taught in the English department from 1946 to 1979. The award has been endowed by her friends and former students, and recognizes outstanding rising senior majors from small towns in North Carolina.
Emily Crandall Shaw Scholarship in Liberal Arts: Andrew Murphy
Emily Crandall Shaw and her husband Bynam Shaw, who was a professor of Journalism at Wake Forest, were Wake Forest alumni. After Mrs. Shaw’s death, Mr. Shaw set up this scholarship in her memory to recognize outstanding rising senior English majors who show talent in arts as well as in literary study.
Justus and Elizabeth C. Drake Scholarship: Katherine Laws
Justus Drake was a professor of English at Wake Forest for a number of years. He taught American and Victorian literature. His wife Elizabeth was the administrative assistant to President Scales. The Drakes’ sons were Wake Forest alums, and they set up this scholarship in their parents’ memory to recognize the outstanding accomplishments of our rising senior majors.