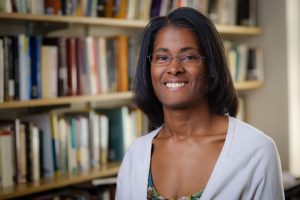 Associate Professor, Literature Program. I earned my BA in English from Wake Forest University, and my MA and PhD in English from Harvard University. I research nineteenth century British literature and culture, the history of the book, and gender studies. Current projects include book-length manuscripts entitled Habits of Sympathy in Victorian Britain and Children’s Literature and the Architectural Imagination.

‘This is a distinctly new kind of book on fatherhood: an innovative study of the troubled relations between real and fictional fathers and sons, and the extra-literary texts that shaped them. Juxtaposing J.S. Mill and Max Weber, Melissa Jenkins’s lively and provocative analysis tracks shifting notions of patriarchal authority from Gaskell to Gosse through engagement with conduct books and family prayers, palimpsests and science writing, to create an “idea of the father” perpetually under reconstruction.’ -Valerie Sanders, University of Hull, UK

“In each of these chapters, Jenkins’s central focus of analysis is an authorial career, which is one of the book’s great strengths…Jenkins manages both to illuminate individual works and to provide a sense of their dynamic coherence with one another.” –Journal of British Studies, April 2015

“a fresh interdisciplinary study that will interest scholars in both masculinity studies and gender studies.” –Review of English Studies, July 2015

“of especial interest to Bronte and Gaskell scholars and is well worth studying on all fronts.” – Bronte Studies, November 2015

“The Next Thing You Know, You’re Flying Among the Stars: Nostalgia, Heterotopia, and Re-Mapping the City in African American Picture Books.” Children’s Literature Association Quarterly 41.4 (Winter 2016): 343-364.

“‘Was Ever Hero in this Fashion Won?’ Alternative Sexualities in the Novels of George Meredith.” Straight Writ Queer: Non-Normative Expressions of Heterosexuality in Literature, ed. Richard Fantina. Jefferson and London: McFarland, 2006. 124-133.